This lesson was awesome! I’m so excited. It was full of energy and music and everyone talking and I feel great after it. So here’s what we did.

I had taught many Small Talk lessons in the past, usually using textbooks or some other ELT materials. We would do the usual good/bad topics for conversation and you should talk about the weather etc. When I was planning this one, however, I decided to turn away from books and look in the business world to see how small talk is done there.

So every day for the past week I spent some time reading online articles about Small Talk and networking. I used up my free limit to articles in HBR within ten minutes. I learnt a lot myself and I used a lot of the information in my worksheet, too.

In the actual lesson we established the topic by talking about what Small Talk is and some golden rules: You don’t have to be brilliant, but you need to be kind and show your willingness to talk. For the rest of the class we worked round four situations:

I asked my students to read them and choose in which one they would feel the most/least comfortable.

Then, I asked them to choose one or two situations and write the exact sentence how they would begin and end the conversation. This revealed that my students were all familiar with the basics of small talk because their ideas were all reasonable.

In the next stage, I introduced them to three techniques I had found online:

And I asked them to match them to phrases that correspond to the techniques: 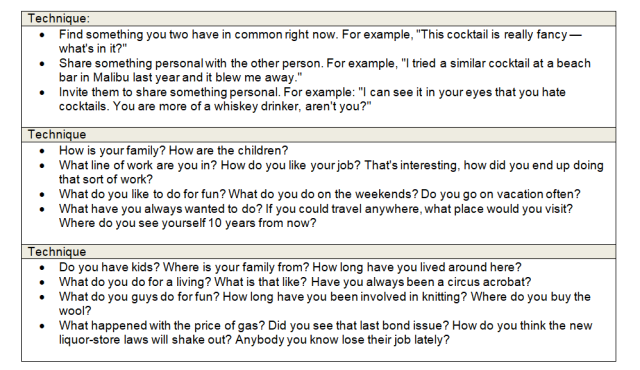 This turned out to be a really smart move because having attended many ELT courses in the past, all the students were aware of small talk topics but none of them had known there were techniques! We explained and discussed these and looked at the language in the phrase bank.

In the next stage, we looked at how to begin and end a small talk and I provided the class with another phrase bank:

Up until now the lesson was a bit too PPP like with me throwing phrase banks at students, but they were really enjoying studying the new language. Moreover, my suspicion that advanced students often don’t know elementary everyday language was confirmed. Here we got stuck at: “What do you do for a living”, which some of the students got completely wrong. “What line of work are you in” was a new one, too.

I told my students how extremely important it is to be able to exit the conversation gracefully and then we simply drilled some of the phrases. Interestingly, at this point, the class got much more energized. The drill did the trick! I also did some frontal controlled practise asking different students what they did for a living and for fun and where they went on vacation.

We then did the “obligatory” split of a list of topics into appropriate and inappropriate ones (yes food, no politics) just to make the list full.

It is only then that the students did the first free-production task. I asked them to choose one of the four situations and talk to their partner for 2 minutes using the new language. When they hear my signal, they were to close the dialogue and assess their performance. I provided feedback as I was listening but honestly, my eyes were mostly on the timer.

After this, I thought it was time for a change of pace. I also wanted my students to get a picture of a naturally flowing conversation. I showed them a video of Ellen from The Ellen Show talking to Michelle Obama about her post-White House life. It is this one.

Trust me, I’m a non-TV person and it took me ages to find a suitable clip. I had expected my students wouldn’t be familiar with the show (they weren’t) but I needed them to at least know Ellen’s guest. This video is great because, in spite of it being an interview, there is a lot of natural language and Small Talk going on. We only watched the first three minutes or so, until they start talking about Trump.

There weren’t really any instructions. I explained to the students the video served as an illustration and also to make them relaxed. After watching, I quickly checked understanding and had the students comment on it briefly.

Then I gave them instructions for the last task:

You are at an after-conference party. You don’t know anyone. You are bored because you don’t know the people. Chat to the person next to you until you hear a signal from the teacher. Then close the conversation politely and move on to another partner. Use the strategies and language you studied today.

I put on some loud You Tube pop music – hadn’t made my choice before but we ended up sort of nicely with Adele, Mariah Carey, Rihanna and Whitney Houston (never listen to them myself but it was ok). The music was there to simulate party music and actually many of the students used it as a cool conversation starter: “This is a great party! And I love the music.”

I gave a signal every 90 seconds and we did three rounds. By the time we finished, everyone was able to exit the conversation politely and start talking to another person. I was really impressed. These are Czechs, who normally don’t do small talk, and academics, but everyone got really into it and did really well. It must have been the Rihanna song, after all.

The exit-ticket this time (I design a different one for each lesson if you haven’t noticed yet – my personal challenge) was a 3-2-1 Reflection: write 3 things you liked, 2 things you learnt, 1 thing you would like to learn more about. Followed by a short whole-class feedback and we were done, EXACTLY 90 mins after we started. (So proud of my timing!).

What I liked: The timing went well. I was satisfied with my preparation but it took a lot of time. The worksheet itself took two hours to write not to mention the time spent with Business Insider and the Harvard Business Review. The video and the phrases were well selected, if I am to trust what the students said in the feedback stage. The worksheet I’d made had too many activities but we skipped some of them. If you’re new to teaching (probably not, so just skip the rest of the paragraph), remember to work on your lesson, not on your materials. The point is not to fill in every exercise on the page. The material is only there to support your lesson.

Next week we’re going back to emails and tone and formality. Hmmm. Should be interesting. (I much prefer Speaking lessons but shhh…)

Let me know what you think and thanks for reading! 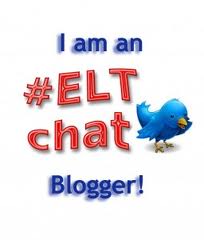 Musings of an English Teacher

I love to discuss stories, movies, tv, games and their impact on our culture

The ramblings of an English language teacher

Teaching, travels and tidbits of life.

There and back again: A Teacher's Thoughts
What do you think you're doing?

A critique of ELT teacher trainers

For you, then your learners

Reflections of an ESOL teacher

An Evidence-Informed Blog for Learning Professionals